You are here: Industry Insights > Features > Application of Novel Herbal Plant and Mushroom Extract As Source in Drug Development

The use of herbal plants and mushroom extracts/compounds as medicines has a long history in the treatment of various diseases and is now globally accepted in the form of pharmaceuticals and functional foods.

According to the World Health Organization (WHO) estimates that 80% of the world populations presently use herbal medicine for primary health care because of its time tested safety and efficacy (1). Scientific research and interest in herbal plant and mushroom extract is on the rise and as a source of new compounds for drugs is becoming a global trend in the pharmaceutical industry (2).

This article was to provide readers with an inside look into the novel herbal plants and mushroom extracts so that they can develop a sense of the current state of research in this field on drug development.

Today, herbal plant products and their derivatives represent more than 50% of all the drugs in modern therapeutics and approximately 80% of antimicrobial, anticancer, cardiovascular and immunosuppressive drugs are of plant origin (3). This led to a discussion in several herbal plants and mushroom extracts for pharmaceutical potential.

Cannabis is a plant of the cannabaceae family and contains more than eighty/80 biologically active chemical compounds. Currently, medical cannabis products have been approved in thirty-three/33 states and eleven/11 legal recreational marijuana state plus Washington DC in the United States.

In recent years, cannabinoids have been extensively studied for their potential pharmaceutical effect. As of 2018, the Food and Drug Administration (FDA) has approved one cannabis-derived and three cannabis-related drug products that are being used for several medical conditions, such as AIDS wasting syndrome, epilepsy, neuropathic pain, treatment of spasticity associated with multiple sclerosis, and cancer as well as chemotherapy-induced nausea.

Epidiolex is the first FDA approved cannabis-derived drug, which contains a purified form of the drug substance cannabidiol (CBD) for the treatment of seizures associated with Lennox-Gastaut syndrome (LGS) or Dravet syndrome (DS), two rare and severe forms of epilepsy that don’t respond to antiseizure medications. That means the FDA has concluded that this particular drug product is safe and effective for its intended use (4).

This is the FDA approved new liquid formulation of dronabinol. Indications are the same as Marinol.

Cesamet (Nabilone) is a synthetic cannabinoid an antiemetic for oral administration. Antiemetics are medicines that help prevent or treat chemotherapy-induced nausea and vomiting (CINV)(5).

Other Medical Cannabis Drugs in Development

For pharmaceutical industries, with a gradual revising of laws and regulations, a host of drug developers are researching cannabinoids as a potential treatment for certain psychological and neurological disorders. It is a promising choice to develop more CBD-derived herbal medicines as novel drug products for the U.S. market. These drug developers are:

GW Pharmaceuticals is a UK based public company. It is best known for its Sativex (naxibimol) oromucosal spray of a formulated extract (CBD) of the cannabis plant. It was approved for use in the UK 2010. Several other countries followed.

Corbus Pharmaceuticals is a US based Phase 3 clinical-stage pharmaceutical company working on a new drug called Anabasum. This synthetic oral endocannabinoid-mimetic drug binds to the CB2 receptor expressed on activated immune cells and fibroblasts.

Cara Therapeutics is another US based clinical-stage biopharmaceutical company and is trying to expand its products to include cannabinoid-based drugs called CR845. This experimental drug is designed to reduce the central nervous system side effects, like pain and itching, often observed with traditional opioids, such as morphine.

Zynerba Pharmaceuticals is US-based company and focus their development efforts on CBD as it has demonstrated positive effects in the CNS and is non-euphoric and non-addictive.

These drugs brought evidences about today's trends and development of potential cannabis-derived products as an herbal plant-based alternative source for novel drugs.  Pharmaceutical companies have good reason to study cannabinoid-derived compounds because of their potential to alleviate certain symptoms with few side effects. With future projections, CBD will likely be used to treat other medical conditions soon. However, now, researchers can only acquire research-grade cannabis.

It is important to understand that research study indicates long-term marijuana use may cause cognitive and emotional deficiencies. Any clinical research using cannabis-related substances are scheduled by the US Drug Enforcement Administration (DEA) often involves interactions with several federal agencies. This includes a registration administered by the DEA; obtaining the cannabis for research from the National Institute on Drug Abuse (NIDA), within the National Institutes of Health (NIH), or another DEA-registered source; and review by the FDA of the IND or NDA application and research protocol.

Withania Somnifera (WS), commonly referred to as ashwagandha, Indian ginseng. This herb has been known for centuries in Ayurvedic medicine. The roots of shrub ashwagandha (and sometimes the leaves) are prepared and used in herbal medicine as a tonic, pill or powder. The biologically active chemical constituents of ashwagandha include alkaloids (isopelletierine, anaferine, cuseohygrine, anahygrine, etc.), steroidal lactones (withanolides, withaferins) and saponins (6).  Ashwagandha is available in the United States as a dietary supplement.

The traditional uses of the plant, the experimental evidence supporting its chemopreventive potential make it one of the novel sources and viable option for future research on drug development in humans.

Sage is an herb. The two most common species are common sage (Salvia officinalis) and Spanish sage (Salvia lavandulaefolia)(11). Common sage is one of the most important medicinal and aromatic plants, with antioxidant, antimicrobial, spasmolytic, astringent, antihidrotic and specific sensorial properties (11). This plant composed mainly of the monoterpenes 1,8-cineole, alpha-thujone, beta-thujone, and camphor, is responsible for some of these effects for medicinal purposes.

Sage has been used topically as an antiseptic and astringent, as well as to manage excessive sweating. Sage tea has been ingested for the treatment of dysmenorrhea, diarrhea, gastritis, tonsillitis, and sore throat. Research has shown other many benefits of sage for cognition, mood, diabetes, high cholesterol and improve memory.

In an open, multicenter clinical trial for anti-hot flush study,  Salvia officinalis tincture was found to reduce the incidence and severity of hot flashes during the menopause (12). In another study, Salvia officinalis also significantly decreased hot flashes in prostate cancer patients due to androgen deprivation therapy (13).

Both Salvia officinalis and Salvia lavandulaefolia were associated with improvements in cognitive performance in healthy patients as well as in those with dementia or cognitive impairment (13)(14), thus these health benefits could be used for further development of herbal based drugs.

The Curcura longa herb is commonly referred to as turmeric. This herb belongs to the ginger family and is native to the Indian subcontinent. Turmeric and its natural curcuminoids have been used medicinally over the centuries in different parts of the world. Traditionally, turmeric has been used as a food, cosmetic, and medicine.

The major yellow pigment has been identified as curcumin (diferuloylmethane), a substance with powerful anti-inflammatory and antioxidant properties as well as immunomodulatory capabilities that are derived from its interaction with immunomodulators such as the dendritic cells, the macrophages and both the B and T lymphocytes.  Other active biological activities that can be derived from turmeric include sesquiterpenes, diterpenes, and triterpenoids (15). This herb thus acts on both the cellular as well as the molecular components of these immunomodulators.

Research has shown that the herb could have an impact on the prevention and/or treatment of several conditions such as cancer, cardiovascular, inflammatory, metabolic, neurologic and skin diseases. These diverse pharmacologic activities underlie the importance of the turmeric as well as the potential for drug development (16).

Currently, Phase 1, 2, and 3 clinical trials of curcumin are being conducted by the National Cancer Institute for various diseases (17).

For centuries, mushrooms have been widely used as food and medicine in different parts of the world. This is mainly attributed to their nutritional value as a potential source of carbohydrates, proteins, amino acids, and minerals (18).

Agaricus blazei mushroom has been used in Brazil and other South American countries for the sake of health. Studies have suggested that Agaricus blazei are valuable immune regulatory substances to boost the immune system for treatment of  cancers, type 2 diabetes, hyperlipidemia, liver disease and other cardiovascular disorders (20).

Another study showed that Agaricus blazei species has been implicated as having anti-inflammatory and anti-allergic activities that are regulated by its effect on interleukin 6, prostaglandin, leukotriene and the phosphorylation of the serine/threonine. All of these types of bioactive metabolites and their relevant producers, as well as the different mechanisms of action of mushroom compounds could be potent anti-inflammatory agents (27).

Medicinal mushroom Phellinus linteus ("Sanghuang" in Chinese, ) is a popular  fungus which is widely used in China, Korea, and other Asian countries.   It has traditional applications in the treatment of hemorrhage, hemostasis, and menstrual disorders (28).

Some studies reported that Phellinus linteus comprises various bioactive components, such as polysaccharides, flavones, triterpenoids, phenylpropanoids, and furans.   These compounds have proven to be an effective therapeutic agent for the treatment and the prevention of various diseases including anticancer, anti-inflammatory, immunomodulatory, antioxidative, and antifungal activities, as well as antidiabetic, hepatoprotective, and neuroprotective effects (29).  Phellinus linteus extracts anticancer effects against breast  (30-31), colon (32), liver (33), lung (34) , oral (35), prostate (36) , and skin cancers (37) have also been reported.

Over the years several species of edible mushrooms have been reported for consumption from different parts of tropical Africa. These African mushrooms contain the highest concentration of trace elements and minerals such as potassium, manganese and amino acid.

Like many other medicinal mushrooms, polysaccharides (β-glucans) widely identified in many African mushrooms such as Ganoderma spp., African truffles, Chitin, Pleurotus tuber-regium, Termitomyces spp., Pleurotus spp., Auricularia auricula-judae and Agaricus spp. One of the African mushroom Pleurotus ostreatus has been widely used as food because of its nutritional and medicinal properties.

Interestingly, several new compounds were also isolated from the fruiting bodies of Pleurotus ostreatus (38) and these compounds with the antibiotic activities can be used against selected human pathogenic bacteria and endophytic fungi.

Another study showed that the nutritive properties of the culinary-medicinal mushroom Auricularia auricula-judae have been discovered in new species of the African mushrooms (39).

Today, herbal drugs are becoming more popular in the modern world with the validation of their efficacy as antioxidant, anti-inflammatory, immunomodulatory, anticancer, endocrine restorative, etc. The development of novel agents with no or minimal side effects from herbal plants and mushroom extracts is of utmost importance for the prosperity and welfare of people.

Lin Zhang, Ph.D., senior director of a health care industry company in the United States. With the experience in clinical medicine, biotechnology, health industry and other fields, he is responsible for the research and development of plant medicine, functional food and health products. He was a clinician and worked for the National Cancer Institute, FDA and the National Cancer Center of Japan for many years.

Next:Evolving World of Pharma: Have you given any thought to green chemistry?

Understanding the Impact of High-Shear Blending

In many industries, powders are combined with other powders, or binders, in high-shear blending operations, forming homogeneous mixtures for further downstream processing.

Animal Studies for Predicting Drug Toxicity - Is it Time to Re-Evaluate the Benefits? 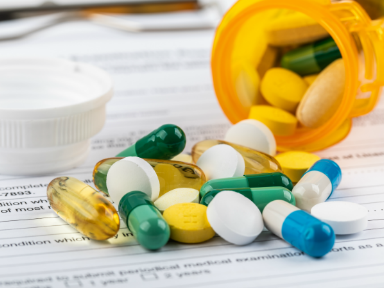 Generally recognized as safe (GRAS) (1) is the U.S. Food and Drug Administration (FDA) designation that a chemical or substance added to food is considered safe.