You are here: Industry Insights > Features > Do we still need animal testing?
Get alerted on the PharmaSources E-Newsletter and Pharma Sources Insight E-Compilation!
Note: You can unsubscribe from the alerts at any time.
Advertising

Do we still need animal testing?

In 2013, the European Union banned the sale of all cosmetics products and ingredients that had been tested on animals. The continued need for regulatory data drove rapid innovations for ground-breaking in vitro safety evaluations. This move towards in vitro toxicity and sensitivity testing has been widely endorsed by consumers, who generally believe that the development of beauty products does not justify the suffering of animals.

Now, there is growing pressure to move away from animal testing in pharma too. As well as lobbying by animal rights activists in the West, preclinical investigators themselves are increasingly concerned that animal experimentation may be based on a scientifically flawed premise. More than 90% of drugs entering clinical trials fail, usually for reasons of toxicity and poor efficacy that were not detected in animals. Findings such as these have led many to re-evaluate the value of animal studies in drug development.1–3

Brian W. Dutko, President & CEO of Pion – a science-based company providing innovative technology, solutions, support and scientific expertise – explains: “During the drug development process, researchers are tasked with collecting in silico and in vitro data and asked to try and predict in vivo human responses. How scientists have bridged this gap in the past has been by assessing injectable formulations within animal models before moving into humans. Although it is relatively accessible to view immune responses in animal models, due to the vast amount of previous research, there have been worrying examples of how some observations do not correlate to how the human body will react to a formulation.”

A matter of safety

In particular, and probably of greatest concern, there is mounting evidence that animal testing is not always a good predictor of drug safety. Animal safety data cannot be confidently translated to humans.

For example, in 2006, a life-threatening 'cytokine storm', not predicted by pre-clinical safety testing, rapidly occurred in all six healthy volunteers during the phase I clinical trial of the CD28 superagonist monoclonal antibody (mAb) TGN1412. Despite causing no concerns in animal tests using 500x the dose used in the phase I study, the human volunteers immediately fell critically ill, and the single dose left them all with long-term complications.

Similarly, in January 2016, a drug developed for a range of neurological disorders, BIA-102474-101, caused deep brain haemorrhage and necrosis in all five human volunteers during a phase I trial; one of these volunteers died. The underlying mechanism that caused the acute neurotoxicity of this molecule remains unknown.

Following these and other cases in which animal tests failed to detect safety concerns, it is argued that animal testing has only retained it acceptability in drug development because clear alternatives have not yet been identified. Yet the cosmetics industry has demonstrated that a variety of novel in vitro technologies could offer effective alternatives that are ‘human relevant’, and in fact those technologies could be better at modelling human diseases and drug responses.

Furthermore, drug developers might already be further along this path than you think.

Use of human cells and tissues in vitro provide effective opportunities for the assessment of safety and efficacy of new medicines. At its simplest level, this comprises straightforward in vitro assays, such as blood cells, pancreatic islets, and various smooth muscle preparations.

Critics will say that these assays do not adequately model the complexity of the whole human body. This is true but, with the development of powerful new technologies, scientists are now able to model complex pathological processes using a combination of simple assays. By integrating a range of approaches applied to human tissues and cells under conditions that better reflect their natural interactions, there have been considerable advances in the use of these models.

An organ-on-a-chip (OOC) is a multi-channel 3-D microfluidic cell culture chip that simulates the activities, mechanics and physiological response of entire organs and organ systems. This field is still young, but various researchers have so far simulated the human brain, lung, heart kidney, artery, skin, bone and cartilage on an OOC interface.

Often referred to as the next wave of 3D cell-culture models, the application of microfluidics in OOC enables the efficient transport and distribution of materials throughout 3D tissue constructs, and mimics a whole organ’s biological activities. For example, brain-on-a-chip systems can model organ-level physiology in neurological diseases, such as Alzheimer's disease, Parkinson's disease, and multiple sclerosis, more accurately than traditional cell culture techniques.

Over the past 30 years, the discovery of new molecules and innovative therapies has led to a rapid growth in the biopharmaceuticals market. However, the way biopharmaceuticals behave immediately after subcutaneous administration is still largely unknown. To tackle this, researchers have developed technologies that successfully simulate the stress conditions and environmental transitions that a biopharmaceutical drug experiences when it is injected subcutaneously.4

Pion’s Brian W. Dutko describes this technology: “Pion has developed the SubCutaneous Injection Site Simulator (Scissor). Within Scissor is the hardware to mimic the mechanical and physiological actions involved in the injection process, monitor pharmacokinetic behaviour, and relate those observations to how a patient would react to such an injection. This technology cannot encompass all the complexities of the in vivo environment, of course. However, we believe that Scissor can replace and improve upon animal studies performed during pre-formulation and formulation development stages, where all cellular processes are not required to make conclusions – for example, when optimizing excipient concentration to slow API release in long-term injectables.”

Mathematical modelling and computer simulations are emerging technologies in drug discovery, development and drug assessment. Computational methods have been shown to be more reproducible and human-predictive than animal tests, and they promise to be cheap, practical, sensitive and specific.

However, existing computer-based platforms are not capable of integrating complex nonlinear interactions of molecular, cellular, tissue, organ and system activities, so it is generally recommended that a variety of different models should be used, rather than relying on a single model. However, with many models already commercially available, the reliability of this approach to predicting drug behaviour in humans will undoubtedly grow.

In addition to this, of course, we will soon not be limited by existing computer-based platforms - with the quantum revolution dawning, the future is really looking very exciting for non-animal testing in pharma. In fact, there is little doubt that quantum has the potential to disrupt drug discovery. Quantum computing could revolutionize the time and cost of taking a new drug to market, with some of the greatest value probably being realized in the preclinical stages.

Quantum computers are especially well suited to molecular simulations, so ultimately, they are expected to enable computational tools for antibody design, and for providing a ‘tool set’ of molecules that might be best suited to solving a particular medical problem. This could involve the design and optimization of protein therapeutics, or predictive algorithms to generate human-relevant data. The ability to generate data and synthesize novel chemistries will help researchers find the molecules most likely to succeed, dramatically reducing the current 90% fail rate of drugs reaching the clinical trial phase.

So is the future in vitro?

The promise of lower costs, higher success rates, more readily translatable data, and the convenience of new technologies will all combine to an inevitable conclusion. However, in order for novel technologies to replace animal tests, regulators must accept alternative data in regulatory dossiers, in lieu of conventional animal-based preclinical tests. Currently, many regulators still require animal tests for evaluations such as drug toxicity, and until alternatives are accepted by regulators, the pharma industry will not be able to move past this crucial barrier to the elimination of animal testing in drug research and development.

However, don’t forget that we stand at the beginning of a quantum revolution. Quantum is going to change drug discovery, development and delivery in ways that we can probably only just start to imagine now – we have only touched on one aspect of those changes here, and very briefly at that. I believe that quantum is going to change our world in ways that we cannot truly anticipate right now. And that makes me wonder if the right question to ask is not whether the future is in vitro, but whether in vitro preclinical testing will be simply a transitionary stage to the ultimate goal of clean, efficient in silico testing of new drug entities… or should I say, in cubit?

The drive to expand vaccine​ manufacturing in Africa is gaining momentum with several new partnership agreements including technology transfer for the production of both malaria and COVID-19 vaccine... 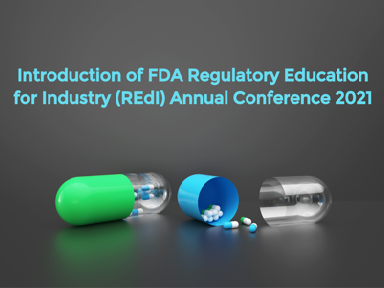 There are many educational events in FDA throughout the year that focus on the pharmaceutical and regulatory industries.