You are here: Industry Insights > Industry Data > Chinese Developed New Drug Exploits the Field of Diabetes
Get alerted on the PharmaSources E-Newsletter and Pharma Sources Insight E-Compilation!
Note: You can unsubscribe from the alerts at any time.
Advertising

Chiglitazar sodium is a novel peroxisome proliferator activated receptor (PPAR) complete agonist with non-thiazolidinedione (TZD) structure independently developed by Chipscreen. PPAR is a family of nuclear receptors that regulate glycolipid and energy metabolism in the body, including three subtypes, α, δ, and γ. Chiglitazar sodium can moderately balance and activate three receptor subtypes, PPARα, γ, and δ, which is expected to comprehensively regulate the blood glucose and blood lipid levels of diabetic patients, and can counteract the potential side effects caused by the activation of a single activated PPAR γ subtype.

The results of two multicenter, randomized, double-blind, controlled three-phase clinical research with placebo and sitagliptin show that: (1) The absolute value of glycosylated hemoglobin (HbA1c) in type 2 diabetic patients decreased by 1.32%-1.52% after 24 weeks of treatment with two doses of chiglitazar sodium compared with that before treatment, indicating that both doses have sustained and clinically significant glycemic control. (2) The main efficacy endpoint of the research is superior to that of placebo, but shows non-inferior to sitagliptin. (3) While effectively controlling HbA1c, compared with sitagliptin, the two dose groups of chiglitazar sodium, especially the 48mg dose group, show a better therapeutic trend than sitagliptin in a series of secondary therapeutic endpoints, such as fasting blood glucose, 2-hour postprandial blood glucose, insulin resistance index, triglyceride and free fatty acid. (4) In terms of safety, the overall occurrence rate and severity of adverse events of the placebo and sitagliptin control groups and the two dose groups of chiglitazar sodium are basically consistent. (5) In the two trials, the low-frequency side effects related to PPARγ activation, such as edema and weight gain, were observed in the chiglitazar sodium treatment group, but they are significantly lower than those reported by TZD drugs.

Diabetes is one of the most common chronic diseases, which is mainly divided into type 1 diabetes and type 2 diabetes. The latter accounts for about 90%. China has the largest number of diabetic patients in the world, which was about 116.4 million in 2019 and is expected to reach 129.8 million in 2020. According to public information, in 2019, the total diabetes market size of public medical institutions and retail pharmacies in China was about 69.59 billion yuan.

Depending on the different mechanisms of action, the common diabetes drugs in clinic are mainly divided into eight categories, including biguanides, insulin enhancers (thiazolidinediones), insulin secretagogues (sulfonylureas and glinides), α-glucosidase inhibitors (acarbose and voglibose), DPP-4 inhibitors, SGLT-2 inhibitors, GLP-1 receptor agonists and insulin. In addition, there are many Chinese (patent) medicines used in the treatment of diabetes, such as Mulberry Twig Alkaloids Tablets in Beijing Wehand-Bio Pharmaceutical. 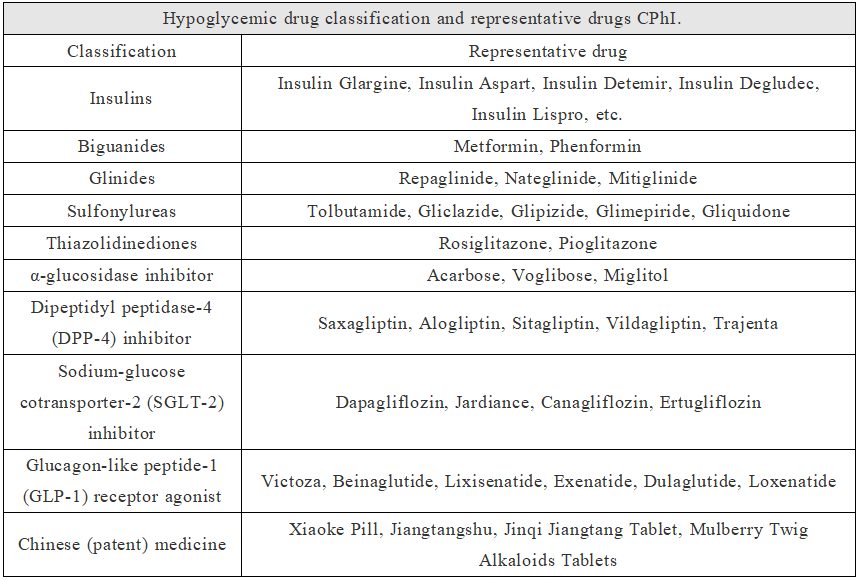 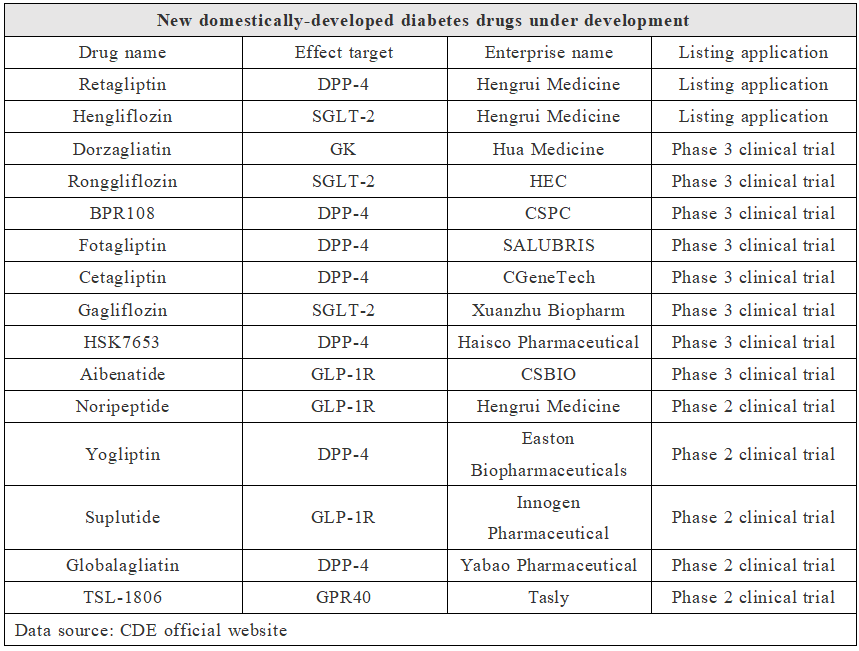 Looking at these new diabetes drugs, they mainly focus on traditional targets such as DPP-4 and SGLT-2, and there are also some new target drugs, such as dorzagliatin of Hua Medicine. Dorzagliatin is a glucokinase activator (GKA) drug independently developed by Hua Medicine, which improves β cell function and reduces insulin resistance in type 2 diabetes patients by repairing the damaged glucokinase sensor function of diabetic patients. It is worth mentioning that dorzagliatin is the first GKA diabetes therapeutic drug to submit a new drug marketing application in the world.

Moreover, there are many original new compound diabetes drugs in China, such as HR17031 of Hengrui Medicine, HS-20094 of Hansoh Pharma, HEC88473 of HEC, etc. HR17031 is a fixed proportion compound injection of basic long-acting insulin and GLP-1 analogue. HS-20094 is a new generation of GIP/GLP-1 double receptor agonist independently developed by Hansoh Pharma. HEC88473 is a GLP-1/FGF21 double agonist.

Next:Pharmaceutical Companies have been Engaged in the R&D of BET Inhibitor with Great Efforts