You are here: Industry Insights > Industry Data > Weekly Pharma News Review | PharmaSources.com (1107-1111)
Get alerted on the PharmaSources E-Newsletter and Pharma Sources Insight E-Compilation!
Note: You can unsubscribe from the alerts at any time.
Advertising

This week, the hot topic in terms of drug review was that the first highly selective PI3Kδ inhibitor in China, linperlisib of YL-Pharma, was approved for marketing. In terms of R&D, positive progress has been made in several clinical trials, but the Phase III clinical trial of GSK's BCMA ADC combined with pomalidomide in the treatment of myeloma failed. In terms of business, Jumpcan Pharmaceutical entered into a cooperation agreement with Newsoara and obtained the development rights of two drugs.

The news review of this week is from November 7 to 11, covering a total of 26 pieces of information in 3 sections, i.e., drug review, R&D, and business.

2. On November 7, the NMPA official website revealed that the Linagliptin and Metformin Hydrochloride Tablets of Qilu Pharmaceutical had been approved for marketing, following the first generic drug from HEC and being the second one in China. The first research of Linagliptin and Metformin Hydrochloride Tablets was jointly developed by Boehringer Ingelheim/Eli Lilly for improving the blood glucose control of type 2 diabetic patients. The import was approved in China in March 2017, with the brand name Trajenta Duo.

3. On November 9, the NMPA official website revealed that the first-in-class, linperlisib tablets of Shanghai YL-Pharma (brand name: Itari) had been conditionally approved for marketing. Linperlisib is for adult patients with recurrent or refractory follicular lymphoma who have received at least two kinds of systematic treatment in the past. Linperlisib (YY-20394) is a phosphatidylinositol-3-kinases δ subtype (PI3K δ） selective inhibitor.

4. On November 10, the NMPA official website revealed that the biosimilar drug of denosumab injection (LY06006/BA6101) of Boan Biotech, a holding subsidiary of Luye Pharma, had been approved for marketing. It is used for postmenopausal women with osteoporosis and high fracture risk, and can significantly reduce the risk of vertebral, non-vertebral, and hip fractures. LY06006 is a recombinant anti-RANKL human monoclonal antibody injection.

5. On November 10, the CDE official website revealed that the marketing application of Levofloxacin Dexamethasone Eye Drops (NTC010) of Zhaoke Ophthalmology had been submitted and processed. NTC010 is a fixed compound formulation of 0.5% levofloxacin (broad-spectrum quinolone antibiotic) and 0.1% dexamethasone (corticosteroid anti-inflammatory drug). It is for the prevention and treatment of inflammation and infection related to cataract surgeries.

6. On November 9, the CDE official website revealed that the Phase I clinical trial of JCXH-211 injection, a first-in-class drug of Immorna, had been approved for the treatment of malignant solid tumors. JCXH-211 is a new drug developed based on self-replicating mRNA and encoding human interleukin-12 (hIL-12) which can express IL-12 in vivo for a long time and is potentially applicable to the treatment of solid tumors.

7. On November 7, the CDE official website revealed that HLX23 of Henlius had been applied for clinical treatment in China for the treatment of advanced solid tumors. HLX23, a CD73 monoclonal antibody independently developed by Henlius, can specifically bind to CD73 on the surface of cancer cells to inhibit CD73 nucleotidase and promote CD73 endocytosis, thus inhibiting tumor growth.

8. On November 10, the CDE official website revealed that IBR854 cell injection of Imbioray had been applied for clinical treatment in China. IBR854 is an innovative compound coupling product of 5T4 antibody and NK cells. The core structure is to covalently couple specific antibodies targeting tumor antigen 5T4 with allogeneic NK cells through a linker.

9. On November 9, the CDE official website revealed that the marketing application of ziresovir enteric capsules of ArkBio had been included in the proposed priority review for the treatment of respiratory tract infection in children aged 2 years and under caused by the respiratory syncytial virus. Ziresovir is a kind of small-molecule inhibitor of RSV fusion protein with a new structure. It can combine with the fusion protein of the virus to prevent the virus from invading human cells and diseases caused by infection.

10. On November 10, the CDE official website revealed that the marketing application of ritlecitinib capsules of Pfizer had been included in the proposed priority review for the treatment of alopecia areata in adolescents and adults who aged 12 years old or above and can receive the systematic treatment, including alopecia capitis totalis and alopecia universalis. Ritlecitinib is a JAK3 targeted oral inhibitor developed by Pfizer, which achieves the selective inhibition of JAK isoenzymes through covalent interaction with JAK3 specific residue CYS-909.

11. On November 9, the CDE official website revealed that it had been proposed to include the recombinant human B lymphocyte stimulator (BLyS) receptor-antibody fusion protein for injection, the first-in-class of Remegen, in the breakthrough therapy designation, with the targeting indication of generalized myasthenia gravis. Myasthenia gravis, a rare chronic autoimmune disease, has been included in China's Catalogue of the First Batch of Rare Diseases.

12. On November 8, Regeneron announced that the new indication of its PD-1 inhibitor, Libtayo (cemiplimab-rwlc), had been approved by the FDA for the first-line treatment of patients with advanced non-small cell lung cancer (NSCLC) without EGFR, ALK, or ROS1 abnormalities in combination with the platinum chemotherapy. Patients are diagnosed with metastatic or locally advanced tumors and cannot undergo surgical resection or radiotherapy and chemotherapy. This combination therapy can be applied regardless of the expression or histology of PD-L1.

13. On November 9, the FDA Pulmonary-Allergy Drugs Advisory Committee (PADAC) voted (8:5) against the marketing of sabizbulin, an oral medicine of Veru for patients with severe COVID-19 since the statement that its clinical benefits are not greater than the risks. Sabizabulin, a new oral small-molecule bisindole tubulin inhibitor, has an anti-inflammatory effect and can prevent the cytokine storm caused by SARS-CoV-2 infection.

14. On November 10, the FDA announced that the triple combination therapy of anti-CTLA-4 antibody tremelimumab (Imjudo) of AstraZeneca, anti-PD-L1 monoclonal antibody durvalumab (Imfinzi) and combination chemotherapy had been approved for marketing. It is for the treatment of adult patients with metastatic non-small cell lung cancer (NSCLC) but without carrying epidermal growth factor receptor (EGFR) mutation or anaplastic lymphoma kinase (ALK) fusion.

15. On November 7, Innovent announced that the Phase III CREDIT-1 clinical results of its self-developed PCSK-9 monoclonal antibody, Tafolecimab (R&D code: IBI306) in Chinese patients with non-familial hypercholesterolemia (non-FH) were presented at the American Heart Association (AHA) Scientific Sessions 2022 as an e-poster. The results indicate that Tafolecimab can remarkably and persistently reduce the level of low-density lipoprotein cholesterol (LDL-C) in patients, and showed a favorable safety profile.

16. On November 7, The Janssen Pharmaceutical Companies of Johnson & Johnson, in collaboration with Idorsia, jointly announced that the positive results from the Phase III PRECISION study, which found aprocitentan, the jointly developed product of both parties, significantly reduced blood pressure (BP) and maintained the effect for up to 48 weeks when added to standardized combination background antihypertensive therapy in patients with resistant hypertension. Aprocitentan is an investigational, novel dual endothelin (ET) receptor antagonist (ERA).

17. On November 7, SciSparc announced positive interim results at the Phase IIa trial of SCI-110 in patients with Alzheimer's Disease (AD). In the interim analysis, the study met its primary endpoint of security, and also met its secondary endpoint of relieving the restlessness of patients. SCI-110, developed with the specific technological platform of SciSparc, contains Dronabinol (the synthetic form of tetrahydrocannabinol approved by the FDA) and the unique cannabinoid palmitoylethanolamide (PEA).

18. On November 7, Meissa announced interim clinical data from a Phase Ic clinical trial of its self-developed vaccine MV-012-968, which indicates that the vaccine was well-tolerated with no safety concerns and no serious adverse events (SAE). The severity of solicited adverse events (AE) is generally minor, and there is no difference from the placebo group in incidence. MV-012-968 is an adjuvant-free live attenuated vaccine candidate developed by Meissa with its proprietary AttenuBlock synthetic biology platform.

19. On November 7, Ionis announced its achievement of the primary endpoint in the Phase II trial of treating IgA nephropathy with antisense therapy IONIS-FB-LRx. As early as 2018, Roche entered into an agreement with Ionis to develop IONIS-FB-LRx for the treatment of complement-mediated diseases. IgA nephropathy is a progressive nephropathy, which is characterized by the accumulation of immunoglobulin A (IgA) in kidneys.

20. On November 7, Novartis announced results from the Phase II open-label extension ORION-3 trial, which showed that Leqvio provides effective low-density lipoprotein cholesterol (LDL-C) reduction over a four-year period in patients with either atherosclerotic cardiovascular disease (ASCVD) or ASCVD risk equivalent, and elevated LDL-C despite maximally tolerated statin therapy. Leqvio is the first and only small interfering RNA (siRNA) therapy to lower LDL-C and is administered with two doses a year.

21. On November 7, Amgen updated the Phase I data of the weight loss drug AMG133 on American Heart Association (AHA) Scientific Sessions 2022. After 85 days (approximately 12 weeks), patients given low doses of AMG 133 lost 7.19% of their body weight, while those given high doses lost 14.52% and those in the placebo group gained 1.49% on average. Amgen plans to promote the Phase II clinical trial of AMG133 in early 2023.

22. On November 7, GSK announced that DREAMM-3, the Phase III open-label, randomized head-to-head superiority trial of Blenrep (belantamab mafodotin) monotherapy versus pomalidomide in combination with low-dose dexamethasone (PomDex) in patients with relapsed or refractory multiple myeloma (RRMM), did not meet its primary endpoint of progression-free survival (PFS).

23. On November 11, CSTONE Pharmaceuticals announced the GEMSTONE-303 study, in which sugemalimab injection in combination with chemotherapy is used as a first-line treatment of unresectable locally advanced or metastatic gastric adenocarcinoma/gastro-esophageal junction adenocarcinoma with PD-L1 expression ≥5%, met one of its primary endpoints, progression-free survival (PFS). The data indicate that the risk of disease progression or death is reduced by 34% with Cejemly in combination with the first-line treatment.

24. On November 7, Viatris announced that it intended to acquire Oyster Point Pharma and Famy Life Sciences as the foundation of its new ophthalmology franchise, with the total transaction value reaching US$ 700-750 million. Oyster Point is a biopharmaceutical company focusing on eye diseases. Its Tyrvaya, a highly selective cholinergic agonist, has been approved by the FDA for marketing in December 2021 to treat dry eye symptoms and eye diseases. Ji Xing Pharmaceuticals has the rights and interests in Greater China.

26. On November 9, Chimagen announced that it had entered into an agreement with BioRay for the authorization of BioRay to perform the preclinical development of Chimagen's tri-specific antibodies CMG6A19 and the clinical registration, development, production, and commercialization in Greater China. CMG6A19 is a T cell-mediated tri-specific antibody targeting solid tumors. 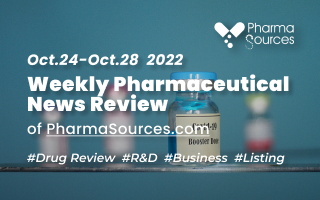