You are here: Industry Insights > Features > Phenotypic Screening and Target-Based Drug Discovery: Is it Time to Unite?

Phenotypic Screening and Target-Based Drug Discovery: Is it Time to Unite?

With advancements in biomedical science, drug discovery has evolved different strategies. However, with this dramatic progress, concerns have emerged regarding the efficiency of translating these technical advances into safe and efficacious new drugs.

The phenotypic screening approach is also called ‘forward pharmacology,’ as the molecular mechanism and protein target can remain unknown even after the drug’s activity and efficacy are determined. A well-known example of a drug discovered by phenotypic screening is aspirin, whose mechanism of action was found almost 100 years after its discovery.

The phenotypic screen is usually more physiologically relevant and less artificial because intact cells and native cellular environments are used. In phenotypic screening, a disease characteristic is exploited to develop a cell-based assay. Compounds are then screened in the assay to identify active lead compounds that ameliorate the disease phenotype.

Primary hits identified in the phenotypic screens can target enzymes, receptors, transcription factors, and even different signaling pathways. Lead compounds can be further selected from the hits with or without knowledge of the target. However, identification of the target can facilitate the structure-activity relationship (SAR) study to decode the relationship between the chemical structure of a molecule and its biological activity.

Phenotypic screening enables drug discovery to proceed with incomplete information – the approach allows for identifications of first-in-class medicines and their respective molecular mechanisms of action or ‘pharmacological hot spots.’ The phenotypic screen enables lead discovery for many diseases in which a drug target has not been identified and validated, for example, rare diseases.

Target-based approach for drug discovery, also called ‘reverse pharmacology,’ generally starts with target identification of a disease of interest. Increased understanding of the molecular basis of a disease has expanded the utility of a target-based approach. The molecular targets are often discovered in basic research, with studies involving animal disease models and clinical observations of patient phenotypes. 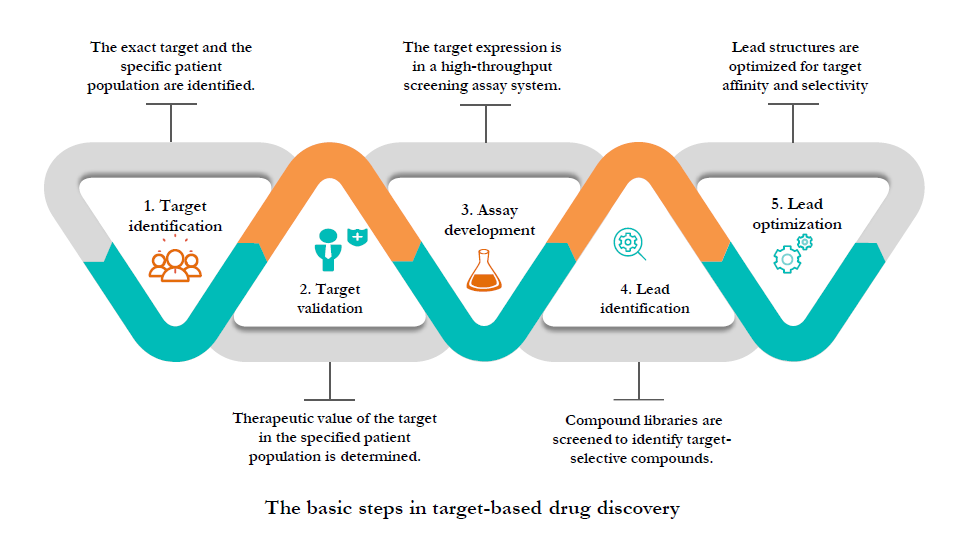 The discovery of the genetic basis of a disease provides hope that a drug targeting that particular gene or the protein produced by the gene has an excellent probability of succeeding. Certain molecular targets, such as protein kinase, have been particularly amenable to a target-based approach. Target-based approach has enabled the development of several drugs acting on kinases, particularly in cancer therapy. G protein-coupled receptors (GPCRs) are the largest family of proteins kinases targeted by around 35% of approved drugs.

Target-based approaches may not be suitable for all disease

Though the target-based approach forms an effective way to discover new treatments target, the cumbersome process of target validation makes the entire approach filled with uncertainty.

The biggest roadblock with target-based approaches is that projects and compounds can fail to translate into clinical results. Targets maneuvered into simple cell-based assays will not always behave the same as in the complex biological environment; even findings from gene engineering in model species may not translate to patients.

Another loophole with target-based drug discovery is that the approach can fail to capture the whole story. Most diseases are caused by a combination of several genetic and environmental factors – hence, simultaneous modulation of multiple molecular targets/pathways is pivotal for successful treatment. In some instances, the drugs may take action at more than one target, and the drug efficacy may not always be due to the mechanisms expected initially; due to this, drugs can produce surprising pharmacology not anticipated originally, such as the clinical response to sildenafil in erectile dysfunction rather than cardiovascular disease.

The resurgence of interest in phenotypic screening

The pharmaceutical industry is gradually moving towards phenotypic screening beyond individual genes/targets. When a prevailing drug target hypothesis proves fruitless, a fresh approach using phenotypic drug discovery may be warranted.

Phenotypic drug discovery can complement target-based programs, and this can certainly cause a paradigm shift and open up new opportunities. There is an overlap between the approaches but also differences that provide opportunities for innovation—combining the best of both approaches when possible can provide both efficient identifications of safe and efficacious new drugs and aid their successful translation into clinical success.

Next:Accure Therapeutics Launches with €7.6M Series A Round